This week, Candice discusses the impact and statements that the fashion world has made on recent female empowerment campaigns, fashion shows, and collections.

“Give a girl the right shoes and she can conquer the world.” – Marilyn Monroe

The mentality has such a great influence on one’s sense of worth and feeling of empowerment, and what better form of self- expression is there than fashion to boost one’s mindset and confidence?

That LBD or pair of jeans that perfectly accentuates and compliments your unique body shape can act as a helping hand in a nerve-wracking blind date or a fun night out with friends. That perfect pair of shoes can give you the comfort you need to tackle that business meeting or win a football match. These small fashion choices and nuances that people might overlook have an immense impact on how we act in our everyday lives and routines.

From clothing to intentional fashion statements, empowerment and self-love has become a central theme in many notable designers’ collections, fashion brands, and the overall fashion scene itself, and we’re all here for it!

“Women should be wearing lingerie for their damn selves” – true to Riri fashion, Rihanna made it a point to let women around the world know that her lingerie line, Savage x Fenty, was for their comfort and enjoyment when interviewed in May.

Having officially launched on May 11th of 2018, it quickly sold out within a matter of minutes. The 90 piece collection was comprised of lingerie, sleepwear, and accessories, and with reasonable prices, a wide size spectrum, and quality designs, the hype for the lingerie was definitely understandable.

Prices sat comfortably under the $100 price point with some pieces as low as $14.50, and the body-positive size range for bras and other clothing items varied from 32A to 44DD and XS to 3XL, respectively.

The general misconception about lingerie is that women don these lacey, racy, and, oftentimes, uncomfortable pieces of garments to please and impress their significant other. This definitely isn’t the case for this collection! Her beauty line, Fenty, and collaboration with Puma were also major hits in the previous years due to their inclusive range of colours, sizes, and overall branding.

A longtime philanthropist, humanitarian, and just overall badass female, Rihanna’s influence on women of all ages, as well as in the general media, is apparent. In March, she easily knocked $1 billion off the value of Snapchat’s parent company, Snap Inc, after criticising the social media app for the approval of an ad that made light of domestic violence. Having been a domestic violence victim herself, she used her influence to speak out against this negligence for those who weren’t able to or those who may have overlooked this deeming it as funny or normal.

Empowering women has always been the focal point of all of her endeavors, and her lingerie line was no different. She said: “It has to be authentic, it has to be from me, my perspective. I’ve wanted to do a lingerie line for a long time, but it was important to me that it be done right. Everyone should feel good wearing lingerie. That’s it.”

Egyptian-Saudi eyewear company, Magrabi, also recently teamed up with Ascia, Nour Arida, Mariam Yeya, Fatima Almomen, and Tamara Al Gabbani, the top 5 female fashion influencers in the Middle East, to launch the female-empowering campaign, #EmpowerYourVision. With gender equality in its core values, this was befitting of this company.

Women living their life the way they envision it is the main emphasis, and this campaign was strategically aligned with the monumental June 2018 Saudi policy that allowed women to drive. In an interview with Harper’s Bazaar Arabia, Ascia said “I feel like we forget that every part of the world is in a different stage of the female empowerment journey. We need to recognise that to empower women even more everywhere, rather than shaming them for not being at the same level.”

Whereas women in Saudi Arabia only recently gained the right to drive, women in more feminist progressive countries, such as the United States, have been driving for decades. But, even at their “progressive” stage, movements such as #MeToo, Time’s Up, and the Weinstein Effect, are still necessary to further give a voice to these women. 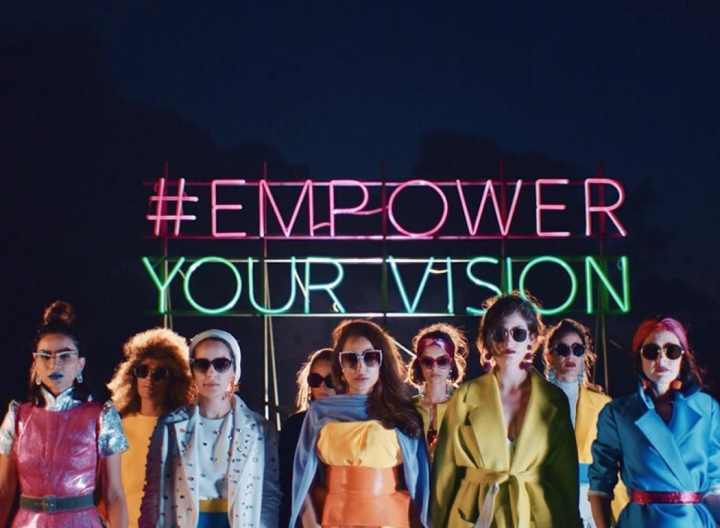 The recent Fashion Week shows are also raising the bar with diversified catwalks. Top model Teddy Quinlivan’s reveal of her transgender sexuality was positively received by many during the end of NYFW. Having seen a plethora of more plus size, transgender, and “unconventional” models on the runway, the fashion world, and its patrons are sending out a clear and loud message. There can never be such a thing as too much female influence or empowerment. We’re only just gaining a

foothold, and brands and shows such as Magrabi and the Fashion Weeks aren’t planning to step down anytime soon.

Vera Wang most famously said, “A woman is never sexier than when she is comfortable in her clothes.” Be it a pair of your favorite sweats on a chill Sunday afternoon or your most glamorous evening gown for a more posh occasion, style and fashion have always been that necessary form of self-expression that people of all walks of life used and needed to present themselves to the world. It doesn’t matter your age, sexuality, shape, colour, or so on.

Your unique style and clothing preferences personify you and display your statement to the world. Whether that statement is “I’m sexy and I know it,” or “I’m a quirky ball of fun,” what you wear really does affect your mentality, and fashion, nowadays, is more noticeably picking up on this and pulling through!

Alexander McQueen had also once said, “I want to empower women. I want people to be afraid of the women I dress.” The interpretation of the sense of fear he speaks of isn’t that of intimidation, mindless obedience, or belittlement, in my opinion. Women who dress for themselves are empowered women, and for those who aren’t ready for this new wave of self- confident and self-assured individuals, that is definitely something to be feared.