We caught up with Fanny Barlow from Mermaid Salon at London Edge to find out what it’s like to go viral.

So, tell us about how you got started?

Originally we made the products to upsell to our clients, because we have a hair salon back home. We didn’t have any products made in Australia or by Australians at this stage. I started it to upsell to people and then the products took over everything. By the time we went viral last year, we had to shift our focus to make-up. The salon’s always booked out back home, but a salon is local and this is global, so of course our focus goes into this. The online store never shuts and we can do it around the clock, and we can do it globally. It’s more fun than the salon! 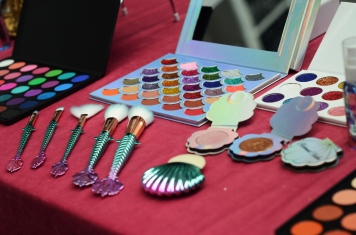 How did it feel to copies of your brushes appearing?

When they first came out, we actually got an inbox to our Facebook page and it was a factory. It was a video of all these tables with all of these copies, and they said, “We’ve produced your brush, would you like to buy them?” I said no – well, I said something worse than that! But I said, “no, I’m not going to buy them” – and they flooded the market about three days after we went viral. They popped up really quick. It was a little bit heartbreaking, but at the same time, I can’t complain because that brush put us in Vogue. It put us in Cosmopolitan and Elle. Sometimes I get sick of looking at them. They’re still our best-seller. I think I’m desensitised at this stage to copies. You just have to take it in your stride, it’s not worth the heartache. Just make something else.

Where are you looking for inspiration next?

I’m always spending time in Japan, and that’s actually what inspired me to make the brush. It was a taiyaki fish, which is a little Japanese dessert in the shape of a fish. Originally it was a mould, and it had a head on it. We cut off the head and we made this little bad boy. I actually think things through a lot because you don’t want to pour thousands and thousands of dollars into a product that might flop. I’m probably going to head back to Japan in May to look for inspiration based on things that aren’t already a product. Maybe landscape, or… it kind of just hits me randomly. Like when I saw this silly little Japanese dessert on the street and thought, “Hmm, that’s going to be a make-up brush!”

Tell us about the make-up products.

We’ve got the lipstick – I actually worked on this formula for a long time. Back in the day, when Lime Crime were innovators, they were hard to get. They didn’t approve people, so I was like, I’m going to try to make this. I came up with my own formula. I put it in a drawer for about three years because I couldn’t afford a chemist – I was an apprentice hairdresser! About three years later I took it out of the drawer and it wasn’t mouldy or separated. I already had the formula done, and then Kat Von D and Jeffree Star were fighting publicly. Jeffree Star also stopped stocking to Australia, which was a big deal. I quickly called the place that I had started formulating with and said, “I’ll give you double, let’s get this into production now”. They did a rush lot and I launched. Everybody that stocked Jeffree Star and were left stranded, they jumped ship. That’s cool because then the money stays in Australia, we get more creative jobs in Australia. There’s no cosmetic productive industry there unless it’s corporate at the moment. That was important for me to have something there for other people that want to follow in my footsteps.

What about your eyeshadows?

A lot of people use these cases but we’ve adapted these to be vegan. Usually they contain lanolin and carmine. Originally we did look at private labelling because they’re easy to sell, but they do have those products in them when you do private label. I was like, “Let’s see if we can switch these out, get them custom made and still affordable”. We did and now they’re a massive seller, and we’re the only ones doing vegan.

I hope it’s not a trend, I hope it stays – you can do a product without hurting anything. We’re called Mermaid Salon because mermaids have a great fear of shallow living. If you’re going to hurt something to look beautiful, that’s not for us. I wasn’t raised vegetarian – I was raised as a meat eater. Then I had children and they’re both vegetarians. Their father is not vegetarian, but even he was on board with, we have to show them our responsibility. They’re going to copy us. They’re going to do what we do. Even if you’re not vegetarian now, you can raise your children healthily as vegetarian and get them to make right choices. Just before I left, my partner cheekily said to my daughter who’s five years old, “Do you want some chicken for lunch?” and she said, “How DARE you?!” I don’t think she’ll ever eat meat now.

What are your aspirations for the future – to go as global as possible?

That’s tough, because to go global I need brick and mortar. To do that internationally, it pushes prices up. We have some products that are more expensive with more fancy packaging, and we’ve got basic ones, but it pushes all those prices up. That’s a conflict for me, because even though people are saying “discontinue these, they’re so basic” – some people have to save up a year for a £20 palette. That’s not for us to decide. If you don’t want to buy it, don’t buy it. There’s people who deserve things who maybe feel like they can’t have them because they can’t afford them, so we will never discontinue our basic stuff. I won’t jeopardise that by taking on expenses we don’t necessarily need because it excludes people and it isolates people. I don’t want to. If there’s somebody I can collaborate with that wants to distribute the product then I will do that before I have brick and mortar, because it’s important. I don’t want to push up prices. 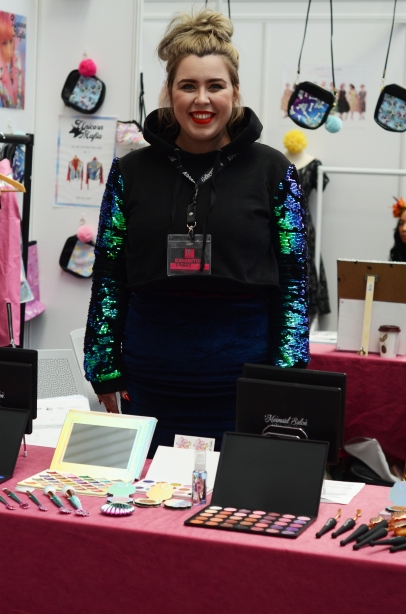